On the paths and roads of the Telšiai region

Do you want to try yourself on a field track surrounded by forest secrets and attractions? Then let’s start the journey! The Jomantai Cognitive Forest Trail winds through the Jomantai Forest, Varniai Forest District. This forest is a part of Varniai Regional Park. It is rich in natural monuments: Jomantai and Triliemenis oaks, Jomantai stone, Aklaežeris (Vokštelis) - a unique lake where the water level changes every year due to the peculiarities of feeding. The main purpose of the Jomantai forest trail is cognitive: to provide an opportunity to get acquainted with the forest, natural monuments, forest inhabitants, the benefits of the forest for people, the work of a forester, forestry in the forest, old traditions. The route of the trail is divided into parts: "Forest Gods' Habitat", "Medžiophone Square" and others. If you are already tired - there are rest areas for stopping.

Probably not everyone visited the house where in 1850-1864. lived bishop, writer and public figure M. Valančius. The manor house of Bishop M. Valančius (Varniai) was built in this place after 1680. the Great Crow Fire. After becoming bishop, M. Valančius moved the residence from Alsėdžiai to Varnius. The bishop also took care of the development of the city - on his initiative, the streets were managed, a doctor, a pharmacy, a post office, a bookstore were established, and the bishops' residence was repaired. 1851-1855 S.Daukantas, invited by the bishop to Varnius, lived in this house. 1864 After the diocese of Varniai was moved to Kaunas, the building was used for various purposes.

Let's go to the Spigino Cape educational trail. The trail route introduces one of the most famous archeological monuments in the country - Spigino Cape and the island. 1985 - 1986 studies of the Spigino Cape showed that it is a unique Mesolithic monument. Remains of a Mesolithic camp were found in Spigino rage, and a large collection of flint artefacts was found. The people who lived here buried their dead on the hill of Spigin Island. 4 graves were found in it. Three of them are from the Mesolithic period, which according to radiocarbon studies date from 6660. pr. Kr. to 3775 pr. Kr. and one Late Neolithic tomb where the deceased was buried tied around 2600 m. pr. Kr.

Did you hear that according to legends, women gathered on the hill in ancient times on the hill, and in the basements deep underground, the defenders of the country hid women and children from their enemies? It is a mound located in the territory of the Samogitian hill and reminiscent of a lying woman. The woman's mound, as well as the adjacent Sprūdė mound, Gludas lake, Sklepkalnis belong to the Baltic defense and cult center, and the defense-political system of Medininkai land.

And the last goal of the tour is Sprūdė (Šaukštelis) mound in Šaukštelis village, Varniai eldership. It is like a mysterious pyramid, highlighting the most beautiful heights of Samogitia, reminiscent of our rich - the rich and glorious past of the whites in the battles for man's place under the sun. According to historians and archaeologists, the mound belongs to the "gunpowder year" - a period of fighting with the Crusaders. Defensive ditches have survived here, traces of ramparts up to four meters high, and the old entrance to the castle can be traced. Legend has it that the wooden castle of Duke Sprūdeikis, the brother of King Mindaugas of Lithuania, stood here, after which cellars were built. 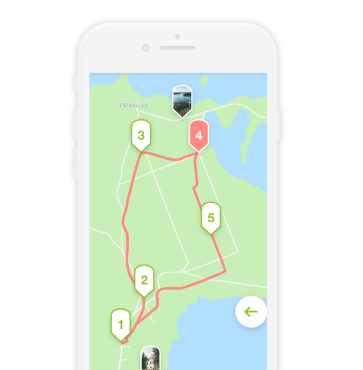