The mound of a woman

1.05 km southeast of Pavandene St. St. Anne's Church, 0.75 km south of Lake Glūdas and 0.3 km east of the Janapole-Bubiai road. The mountain rises 218.2 m above sea level. At its top are 4 elevations, standing a wooden cross.

A mound in the territory of the Samogitian Separation Hill, reminiscent of a lying woman, about 1.05 km from the village of Pavandenė. Rising 218.2 m above sea level. At the top of the hill - a cross, next to it - Gludas (Bludo) lake, Janapolė - Bubiai road.

At the top of the hill are four climbs. The southern part of the hill is three meters higher than the northern one. From a distance, it seems to be a woman’s head. Other elevations form the body image of a woman stretched out for rest.

According to legends, in ancient times, women gathered on the hill to accompany their men to war, and in the basements deep underground, the defenders of the land hid women and children from enemies. The woman's mound, as well as the adjacent Sprūdė mound, Gludas lake, Sklepkalnis belong to the Baltic defense and cult center, and the defense-political system of Medininkai land.

A woman, according to prof. A. Butrimas, should also have belonged to the defense-signaling system of the Samogitian land, which operated in the following order: Defenders of the region, located in the castles of Panemunė, learned about the enemy who had attacked the country and created bonfires at night. The crew members of the nearby mounds, who noticed them, also passed on this message - so the information about the imminent danger quickly reached all the most important Samogitian castles. 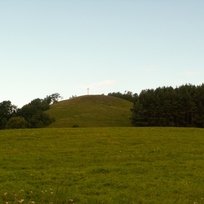