1.4 km northwest of Lake Glūdas, 1.35 km north of Pavandenė St. St. Anne's Church and 0.5 km east of the Janapole-Pavandene road. Sprūdė mound, like a mysterious pyramid, highlighting the most beautiful heights of Samogitia, is reminiscent of our rich - the rich and glorious past of the Whites in the struggles for man's place under the sun. According to historians and archaeologists, the mound belongs to the "gunpowder gad" - a period of fighting with the Crusaders. The territory of the mound covers 26 ha. Defensive ditches have survived here, traces of ramparts up to four meters high, and the old entrance to the castle can be traced.

Legend has it that the wooden castle of Duke Sprūdeikis, the brother of King Mindaugas of Lithuania, stood here, after which cellars were built. Outraged by the King, Duke Sprūdeika fled to Samogitia and established a castle here on his estates, on Sprūdė Hill - the safest and most visible place - but his brother's anger was more insidious - he found it here as well.

Prior to the establishment of the Varniai Regional Park Authority, the mound was completely submerged in the greenery of greenery, it was not visible when driving on the Pavandenė-Janapolė road. Later landscaping cuts revealed part of the castle hill with surviving powerful ramparts and ditches. 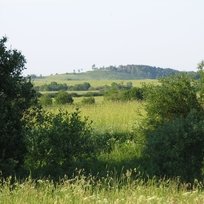 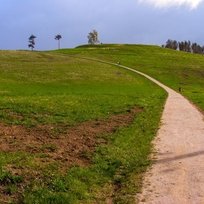