Monument to partisan Francis Bubel-Berz and his father Pran Bubel, who died in exile

The cross of Prano Bubelis, the owner of the homestead, who died in 1948, lived in the former homestead. November 20 in exile in Krasnoyarsk Kr. Ilanskis district, and his son Pranciškus Bubelis-Beržas, a partisan of the Alka team of the Samogitian district, who died in 1947. June 13 Telšiai aps. Alsėdžių vls. Eivydai, in memory.

Unveiled in 1999 October 10 daughter and sister, Ona Bubelytė-Čepauskienė-Liepsna, a political prisoner of the Lieplaukė platoon of the former Alka team of the Samogitian district. 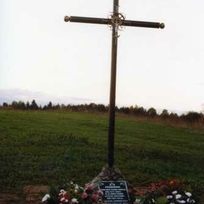