The first church in Tryškiai was probably built in the 16th century. In the middle of the 19th century, when the auditors sent by the King of Poland and the Grand Duke of Lithuania Sigismund Augustus established 12 churches in Samogitia, including Tryškiai.
16th c. At the end of the 19th century, the Protestant nobles Šemeta and S. Vnučkienė, who owned Tryškiai and had estates near Tryškiai, expelled the Catholic priest and gave the church to the Protestants. 17th c. Andrius Valavičius, an elder of Samogitia, an active supporter of Catholicism in Samogitia, who started to try Tryškius at the beginning of 1611. In November, he received a privilege from the King of Lithuania and Poland, Zigmantas Vazas, to allocate 16 Wallachian lands for the construction and maintenance of the Tryškiai church and rectory. The privilege also mentions that the pastor must speak Lithuanian.
The present magnificent wooden church of Tryškiai in 1751. built by the pastor Stanislovas Burneikis at the expense of the parishioners. 1755 it was consecrated by Samogitian bishop Sufragan Mykolas Chomianskis. The church was built by local craftsmen. 1804 a belfry was built next to the church. In the same year a hospital was established near the church. The church was rebuilt in 1869, in the 19th century. pab. - extended. 1928 a new tower appeared on the roof. Church of folk baroque forms, Latin cross plan, with three-walled apse, 2 outbuildings, single tower, with 4 small baroque towers. Inside 3 naves. The interior of the church was reconstructed after the Second World War. The church has 5 altars, probably the most authentic interior decoration - the 17th century. created a side St. The altar of the Virgin Mary Scapular - shows mature baroque forms. The openwork columns and artistically carved side wings surrounding the sculptures of the saints are one of the most impressive wooden baroque altars in Samogitia. St. The painting of the Virgin Mary Scapular was painted in the 18th century. The great altar hangs on the high altar. Trinity painting (so named church) 17th c. in the frame. Carving, sculptures and st. The side painting of St. Anthony stands out. The altar of Anthony.
The churchyard is surrounded by a stone masonry fence. It has a wooden belfry and a chapel with sculptures. In the square in front of the church there is a brick column with St. Florian sculpture.

A monument was erected in the churchyard in 1941-1953. in memory of the victims of genocide and repression. Built in 1991. 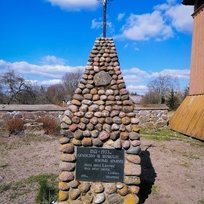