Telšiai Orthodox St. St. Nicholas Church is one of the most exclusive buildings of Lithuanian sacral purpose in its architectural style.

For the first time St. Mikalojus Orthodox Church in Telšiai was built in 1867. on the hill of Vilnius, after the demolition of the Catholic Church and the destruction of the old city cemetery. To the dissatisfaction of the locals, a petition was submitted to the Tsar of Russia, unfortunately nothing was achieved. After more than 70 years, in 1932. By the decision of the Supreme Tribunal of the Republic of Lithuania, the church was transferred to Catholics.

1935 the Orthodox community, after receiving compensation for this decision, purchased a plot in the northern part of the city and hired architect Vsevolod Kopylov for a new church.

St. The Church of St. Nicholas was built in the Cubist style. The basis of its planned structure is a 1000 m3 cube-shaped space, crowned by an onion dome and surrounded by a massive, broken, Cubist-style cornice. From the old church of the 19th century. a three-story iconostasis was moved to it.

The church in the Telšiai region and in the architecture of the whole of Lithuania is exceptional in the use of the Cubist style, which is a unique case in Lithuania. 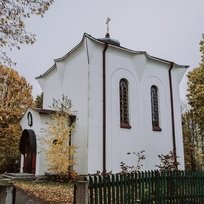 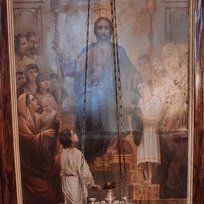