Varniai St. complex of buildings of the Apostles Peter and Paul Church and Lourdes in the cemetery (one of the oldest in 1914)

In the town of Varniai, on the right bank of the Varnelė, St. the church of the apostles Peter and Paul has already been granted the status of cultural value today, but the first cathedral of Varniai has not survived to this day. As early as 1421. traces of the sanctuary, which was started to be built, were not found later in archaeological excavations. Cathedrals in Varniai were erected several times - in 1463, later in 1519. and 1555 but all of them were either unfinished or have not survived to this day.

1681-1691 The Samogitian bishop, Duke Kazimieras Pacas (1667-1695), built a new brick church at his own expense, which was destroyed by fire for more than a hundred years. 19th c. At the beginning of the 19th century, it was renewed by the Samogitian bishop Juozapas Arnulfas Giedraitis. 1864 By the order of Governor Mikhail Muravyov, when the diocesan center was moved to Kaunas, the Cathedral became the parish church of New Varniai.

St. the Church of the Apostles Peter and Paul is of Baroque, Basilic architectural style. Its interior consists of 3 naves and 12 altars. The largest of the twelve altars is from 1694. created in 1853 by the master of Königsberg, Maumo Polini; restored by wood carving master Woldemar Kolberg.

In the church, the chair-bishop's throne, which has been included in the Register of Cultural Heritage, has survived from the time of Motiejus Valančius. Moving to Kaunas, Bishop. Those who cleaned this chair deliberately left it in Varniai to mark the old Cathedral as a sign.

Security in the Church is a large collection of portraits of state-protected Samogitian bishops and paintings of saints “Mykolas Arkangelas”, “Šv. Casimir ”,“ St. Stanislaus ”,“ St. Stephen ”,“ Three Kings ”,“ Holy Family ”, all of which are included in the Register of Cultural Values.

1971 St. the Church of the Apostles Peter and Paul was granted the status of a cultural asset.

Excursions to Varniai St. The crypts of the Apostles Peter and Paul Church will be run from 2020. July 1 Excursions ves can. Domas Gatautas and Varniai Regional Park Manager specialist Alma Būdvytienė.

Excursions will be conducted only by prior arrangement at the specified tel. no. 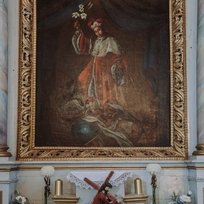 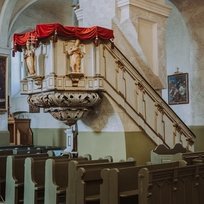 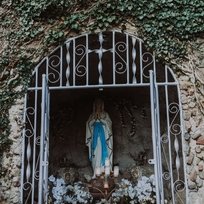 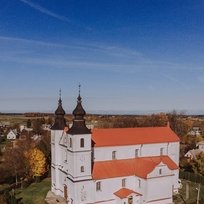