The exact date of the establishment of the Telšiai Jewish cemetery is unknown, but the period of settlement of the community usually coincides with the establishment of the cemetery (beginning of the 18th century). Today, the Telšiai Jewish cemetery has lost its authentic appearance and area. When burials began, the cemetery covered 2.17 hectares. territories. Now the remaining part of the cemetery is 0.43 ha. 1987 most of the Jewish cemeteries were liquidated and their territory turned into a park. Jews living in Telšiai Jewish cemetery in Telšiai, Alsėdžiai, Lauko Sodas, Lieplaukė, Nevarėnai, Tverai, Viešvėnai, Žarėnai and other surrounding villages and manors were buried. 2018 During the implementation of the project “Telšiai Jewish Old Cemetery - Memory before Oblivion”, 223 monuments or their parts and wrecks were found during the scheme of the surviving cemeteries. Identify 95. The oldest surviving and identified burial dates back to 1842, the most recent to 1965. The Jewish communities of Telšiai in 1854–1940 are protected in the Lithuanian State Historical Archive. death metrics books.
1995 The old Jewish cemetery in Telšiai is included in the Lithuanian Register of Immovable Cultural Property and has the highest status - a protected state. 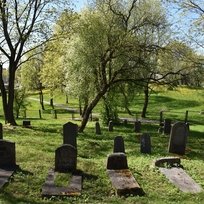