Just as the Samogitians love to laugh, two great walls are known around the world: Samogitians - a loud and convincing demonstration of the Samogitians' special respect for their language, customs, unique history, and a little longer in China. 2010 September 30 The first artistic plate of the Great Samogitian Wall, which was first mentioned in Samogitia (1219), (Prof. P. Gintalas), is reminiscent of the Battle of Durbe won by the united Samogitian army. This notable victory of the Samogitian weapon is not only the greatest and most important of the 13th-14th centuries. Battle of Lithuanian history, but also the historical event that determined the history of the whole Eastern Baltic region (Prof. P. Gintalas). The third plate is intended to give meaning to the struggle of Samogitia, surviving almost two hundred years (1236-1422) in European history, to fight the two German Orders for the ultimate goal of defeating Samogitia and consolidating their territories into one powerful territory for further expansion. The heroic struggle of the Samogitian region, which has demanded a lot of victims, is made meaningful by the art plaque “The Most Famous Battles of Samogitia” (Prof. R. Inčirauskas). For one of the most significant historical events in the world, the Universal Church Meeting, held 1414-1418. In Constanta, the fourth art plaque "Konstanca" (Prof. R. Inčirauskas) was created in memory. At the meeting, 1415. For the Samogitians, after reading the historical "Samogitian Complaint" at the Constanta Cathedral, a broad discussion about the right of the people and the people to choose, the fundamental right of modern international law, begins. The fifth plate, "The Baptism of Europe" (Prof. R. Inčirauskas), is dedicated to the process of Samogitia, the last European historical land to complete European Christianization and modern Europe (313-1413). Artistic plate dedicated to Samogitian christening 600 m. commemorating 2013 President of Lithuania D. Grybauskaitė unveiled. Sixth plate - "The Duchy of Samogitia" (Prof. R.Inčirauskas). Here we see a historical map of Samogitia with dates of recognized treaties that formed the Samogitian borders. It is here that, as jokingly, the Telšiai people "fall" out of wonder, "the patriots" are not interested and do not know the history of their country. Three unadorned wall panels "Privileges to Samogitia", "Swede" and "Republic" are still in their turn. We hope that in the year 2019, when Samogitia and Lithuania will commemorate the 800th anniversary of the first mention of the historical land of Europe in the historical sources. The Great Wall of Samogitians will be completed and serve the knowledge of the history of the country, the development of citizenship and the preservation of identity. 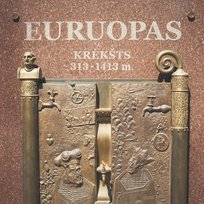 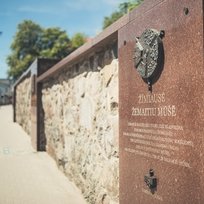