The complex of sacral buildings of the Telšiai Bernardine Monastery and the Seminary of Priests is one of the most important In Samogitia. It stands on the northern shore of Lake Masty, on the hill of Insula. The object was first erected in the 17th century, the complex consists of a Franciscan Bernardine monastery and church (a cathedral that became 1926), a seminary for priests, a bishop's palace, a school and other buildings.

The settlement of the Bernardine monastery in Telšiai was initiated by the elder of Telšiai, Chancellor of the Grand Duchy of Lithuania Povilas Sapiega together with his wife Kotryna Goslauskaitė-Valavičienė Sapiegiene. Confirmation was received from the then King Sigismund III of the Republic of the Two Nations. Initially, a small wooden and later a brick monastery was built. 17th c. Loreto's cottage was built in the middle of the 19th century. Place of worship of the Virgin Mary. Monks prayed there until 1748, when a church built next to it was consecrated.

18th c. In the middle of the 19th century, Telšiai was rebuilt after the Northern War with Sweden, a period of plague and famine at the beginning of the century. With the growing importance of the city, the construction of a brick church was started on the initiative of the father of the Lithuanian Bernardine province Pranciškus Samavičius and the Franciscan Monastery of the Telšiai Bernardine Monastery. The construction was supported by most of the nobility of Samogitia. The construction of the church was completed in 1791, it was consecrated in 1794.

The altar of the Renaissance-Classicist church has been given St. The title of Antanas (1195-1231), one of the best known saints in Samogitia.

1793 a post-district triclass school was opened near the monastery in 1831 by the efforts of the Bernardine parents. became a gymnasium. 1868 the school was ordered to close by the order of the Vilnius Regional Science Curator.

1853 due to the anti-Catholic policy pursued by the Russian authorities, the Franciscan Bernardine monastery was also closed. Part of the monastery became a parish, the church became a parish town in Telšiai, and the priests became parish pastors. 19th century a tower was built in the middle of the church, which was later demolished and doubled due to an insufficiently strong structure. Darkart Church was renovated in 1897-1898 with a metal fence surrounding the entire second-floor gallery and a historicist-style churchyard gate.

1926 April 4 Pope Pius XI established the ecclesiastical province of Lithuania and established the diocese of Telšiai with the apostolic constitution “Lituanorum gente”. St. The parish church of Antanas Paduvietis became a cathedral. Justinas Staugaitis (1866-1943), a prominent figure in the church and the Lithuanian state, was appointed the first bishop of Telšiai. Thanks to his efforts in 1927. a seminary of priests was opened in the former monastery, and in 1929 a seminary annex was built. 1929-1930 the Bishop's Palace was erected.

1940 The bishop was consecrated a bishop at the Telšiai Diocesan Cathedral. Vincentas Borisevičius (1887-1946). He in 1946. February 5 Arrested, tortured and Soviet in 1946. November 18 shot in Vilnius. His remains were discovered in Tuskulėnai in 1999. reburial st. In the crypt of the bishops of Antanas Paduvietis Cathedral. The case of his proclamation as Blessed has been initiated.

The renovation works of the cathedral were carried out in preparation for the 600th anniversary of Lithuania's baptism and the year of Samogitia. The doors of the church are decorated with copper plates depicting the development of Christianity in Samogitia, and the gate of the churchyard is decorated with st. St. Anthony, the patron saint of the Cathedral, and St. Statuettes of Stanislovas, the patron of the city of Telšiai. 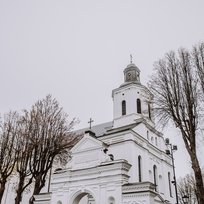 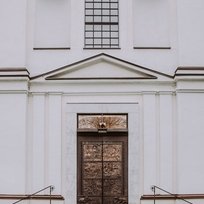 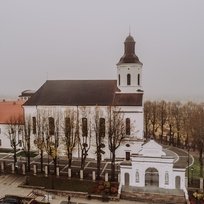 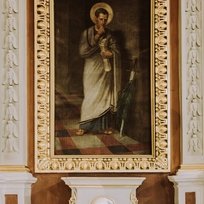