Degaičiai Park - mixed planning, founded in the 19th century. at the end. The area of the old park is 6 ha, the area of the new (developed) area is 18.2 ha. 1986 the park is classified as a natural monument of local significance. 1991 Fragments of Degaičiai manor homestead are included in the list of cultural values to be explained. Degaičiai Park is a state natural heritage object. 2017 included in the list of parks of national importance.

More precise data on who designed the park have not survived. It has been well managed for a long time. Before the First World War, around 1913, the manor was bought by the peasant brothers Liaugaudai. The new owners of the manor focused on economic matters. When managing the park, they limited themselves to preserving rare trees and shrubs.

The park has an irregular network of straight alleys and winding paths. It has 6 ponds of various sizes, sports and playgrounds, many public buildings and various combinations of greenery.

Most of the native species of oak and spruce are in the park stands and tree strips. From the alien conifers in the park grows prickly spruce, European and Siberian fir, blue fir, cedar pine, pea semi-paris and its feathery yellow branch, Serb spruce, western thuja and European larch. There are a number of rarer species and varieties of deciduous trees and shrubs in the park. Here grow red and short-leaved common oaks, red-leaved common beech, red broad-leaved maple, yellow tulip, red hazelnut, red-leaved dwarf, common maple, willow, oak, dogwood, ornamental trees and many other decorative forms.

In total, the park has over 300 species of trees and 100 species of flowers. Many of them were planted at the initiative of Adolf Kishon.

A bicycle weighing 1,800 kg is on display in the park. 400 kg heavier than its predecessor, which earned the Guinness World Record for the heaviest bike. Photo Degaičiai RURAL COMMUNITIES https://www.facebook.com/Degaičių-KAIMO-Community-1682310362091770/ 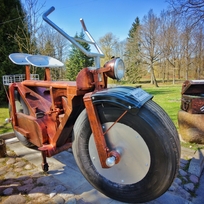