The place of Kęstaičiai martyrs got its name in 1883, when the authorities of Tsarist Russia decided to close the Kęstaičiai church. At that time, Kražiai was considered one of the centers of Lithuanian Catholicism, and there were even several monasteries. In order to instill Orthodoxy in Lithuania, the number of churches in the region has increased since the middle of the century, and churches and monasteries have been closed.

In 1883, the locals protested against the decision of Tsarist Russia to guard and guard the church. In general, people waited for three months in Kražiai and the surrounding areas, as the exact date of the planned closure was not known.

November 22 The then Governor of Kaunas, Nikolai Klingenberg, came to the church together with 70 militiamen and officials. Upon learning of their arrival in Kražiai, believers from the surrounding villages began to flow. When the governor appeared at night, about 400 people waited in the church, trying to meet the escort with bread and salt, holding portraits of the tsar and the queen, and asking the governor to sign a promise not to close the church.

The governor ordered the portraits to be destroyed and the man holding the cross to be arrested. Confusion began, and at 6 a.m. at the invitation of the governor, a regiment of 300 Cossacks arrived from Varniai, then surrounded the city. Praying locals were beaten and trampled - according to official statistics, 54 people were injured and 9 were killed. One woman was killed at the destroyed altar. Some of the defenders of the church drowned in the Kražantė River, through which they tried to escape but broke due to too thin ice.

To commemorate this event, more than 40 crosses have been erected for this event in Kęstaičiai, and services dedicated to the memory of the dead are regularly held. 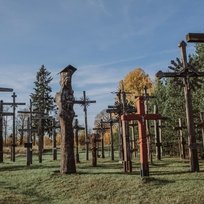 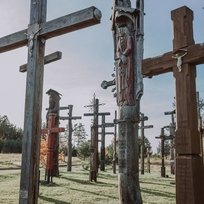 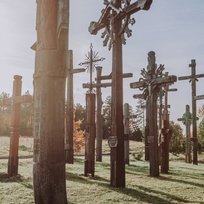 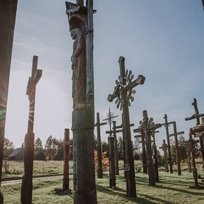